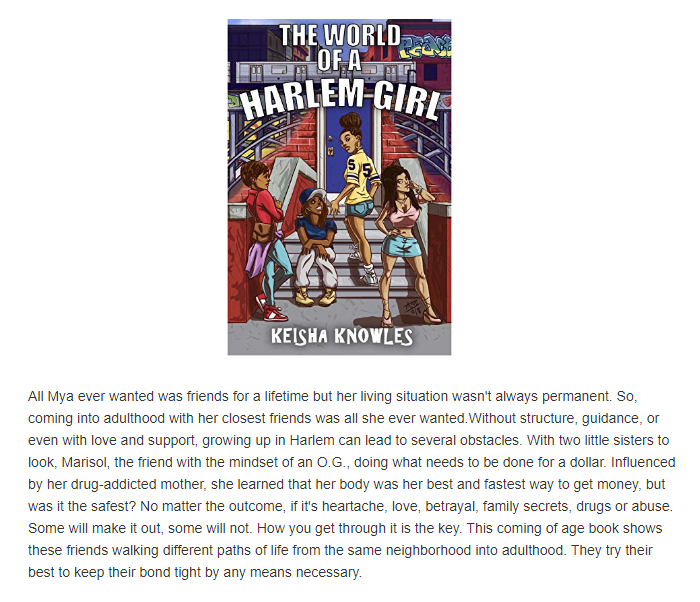 Keisha Knowles the author of ‘’The World of a Harlem Girl” is in her mid forties now.

Knowles has penned a coming of age story about four girls growing up in Harlem, navigating their way through life in the city.

The girls were teenagers in the nineties. The author is from Harlem/The Bronx and she has been writing for over 10 years.

She studied Communications where her professor noticed her writing.

This is the author’s first book and she is already hard at work on a sequel.

The Artist who created the cover art for the book is Larry Douglas.

The Author takes her time introducing us to the characters.

Every chapter engages you and keeps you anticipating what will happen next.

This is a really good read from beginning to end.

I’m definitely looking forward to more stories from this author.

A young African American staggers his way to a pawn shop. He sees his old friend in the window.

And has to make a decision whether to keep running from the police or get his horn back.

The horn, an aged battered Soprano Sax, seemingly begged to be rescued from the wedgy and booger picking little boy who was about to buy it.

The tubby kid menaced the horn by running his sticky digits over the pearls. It made the musician’s flesh crawl, helplessly witnessing the horn’s assault.

The man’s blood drizzled onto his shoe. Decision made, he bricks the window and scoops up his friend from the nasty boy’s clutches.

He started out with his Royal Artist C-Melody horn as a teen, and studied whenever he could, but then he grew up faster than he should have,

when you are born with more good looks than sense.

First girl he knew he knocked up. Then a baby came, and he drank himself into depression trying to figure out how to feed them all.

Got jobs an lost them due to drink.

He couldn’t keep his hands off his band-mates women.

Finally his own woman had enough and split. He soon found no reason to wake up or go anywhere except to get himself another fifth of anything.

He played on the streets with his horn. He was never gonna be Coltrane, but that was what he named his little horn.

He did anything to keep from pawning it, but one day he decided to pawn it for yet another pint of cheap booze.

Lost the pawn ticket and forgot where he pawned it after he got his precious bottle and emptied it into his darkening so-sad soul.

He thought while drinking it, that it has “Been so long since I seen my baby,

He coughed and cried violently.

“Shouldn’t o’ robbed that damn sto’.” He reminisced about the liquor store he just robbed for a mere pint…not even money.

Living on the street for more than a while caused him to get himself a pistol. Today he used it for the first time.

He never even had bullets.

The end was near. He ducked himself into the alley and ran up the staircase to the building’s roof.

He sat there on the edge and opened his nearly empty wallet. Just a dirty old cracked reed he had hung on to.

‘’I knew we was gonna get back together!’’ he told the horn as he started to play rustily and squeekily.

The cops bust through the rooftop’s door and find him, as they approach he turns around and the horn reflects the sun.

His horn and he are forced off the rooftop by three bulleted punches through the heart.

They begin to plummet down to Earth together.

His final desire to play one more time. His spirit spirals downward.

The horn follows his soul through the Earth’s surface and down-down-down to the depths of approaching flames.

“I figured this was where I’d be goin’ finally.” He sighed.

And then… the horn speaks….

The instrument had formed a bond with all his players, and began to play for his old master great Jazz and Blues music

both known and never heard tunes. His metallic form began to melt and drip molten metal as he and the man plummeted

down deeper into Hell. And then the man had a new idea, “I want to try somethin’ horn! We ’bout to be gone forever…

let’s play ourselves a real happy sound for a change!”

Ad he scooped up what was left of horn he called Coltrane, a managed to thunder out the happiest tune he ever heard!

A strange thing then happened…he and the horn began to stop falling, and start to rise up! Up and upwards still they flew

out of Hell! And the next thing you knew they were in Heaven! A tall pensive looking man floated towards them

through the crowd of Angels, and asked…”Can we hear that tune… one more time?”

Welcome to the Red Light District!

An underworld manufactured jambalaya of pimps, junk-punks and dime a dance dolls.

The urgent clumping, thumping footwear of well-dressed men of heft and thik-thok clomping of dames

echo through the air day and night on the city pavement. Graduates of the school of hard knocks hustle

and flow down their avenues of America the Great.

Once too cool for school knuckle-heads, lurk in alleys for opportunities and on corners for affluent drug buyers to sell to or rob.

Swift footed bandits race off with snatched jewelry and purses, while others thug off with big-ticket-booty like

laptops and smart phones bullied from dumb people. Of course the usual heist of loot and guns from pawn shops.

City sewers overflow with gutter rats and dirty cops on the take or just in it for penalty-free beat downs and bang-bangs.

Stool pigeons squeal on their masters for feathered sentences, only to get the shiv when the math is done in the mob bosses heads.

In stir, a lot of thinking gets done by all. Brain muscles never before flexed wake up and start calculatin’ for the first time.

and line up the flunkies to take the big fall for them…next time.

The bosses had their properly-dressed Uzi-boys on guard twenty-four-seven.

The trigger-happy Uzi-boys vomited bullets at the first sign of trouble.

Girls- Only Dirty-dancing Raunchy house-strippers permeated their clubs and teased up booze sales.

Those brave enough to come to The Hang Out usually gained entry.

But Crooked-Copperz had to be kept out though. A club has got to have some standards.

A good show and all the booze you could drink without incident was all that the club offered.

Romances between acts and clients were discouraged by fists.

Muscle-heads from time to time tried to move in on organized territories.

But the strong-armed takeovers were quickly suppressed by violent death.